PORTALS TO THE COSMOS
Shop now

According to Dr. Golod, the geometry and building materials chosen were shown after extensive research to be optimal for providing the most favorable environment for mankind and nature.
Shop now

Russian Geometry Pyramids are by far the most extensively and rigorously tested pyramids ever studied, using strict scientific protocols. This research has been carried out by teams of Russian and Ukranian military, geological, medical and behavioral scientists.
Shop Now

The Power of Pyramids

“In my opinion, the main problem in the study of pyramids is that many tend to see in the results of the research elements of mysticism, shamanism. However, scientists with intuition, already understand that here we are dealing with a new physics and a new biology.”
Dr. Alexander Golod

The field structure of any object, be it a mineral, a solution, cellular tissue, or a living creature, undergoes major changes in the area of impact of the pyramid.
more...

For more information delve into the many resources gathered on the power of the pyramids more...

Stargate Pyramids are based upon a specific geometry found in all major spiritual traditions, including Hinduism, Buddhism, Christianity, Islam and Judaism.

The geometry is also found in Egyptian obelisks and hieroglyphs, medieval castles, Japanese zen pyramids, the refraction of light and sound, Mystery School architecture, the “dunce cap”, witch and sorcerer hats. Most recently, we have discovered this slant angle in the spires and pyramids found in the progression of the Platonic Solids.

This geometry has been demonstrated to be the Geometry of Creation, or Phi Scaling Angle, used to create all things across all dimensions, from the galactic to the sub-atomic.

Dr. Stuart Hameroff has determined that both the overall structure of DNA as well as the microtubules in DNA contain the same geometric angles as those found in the Stargate Pyramid.

This geometry results in enhanced meditation, healing and manifestation, as well as heightened consciousness, intuition and psychic ability. The health, environmental, agricultural and materials science benefits of these pyramids are demonstrated by 30 years of the most comprehensive pyramid research ever undertaken, funded in part by the Russian government and performed by leading Russian scientists. 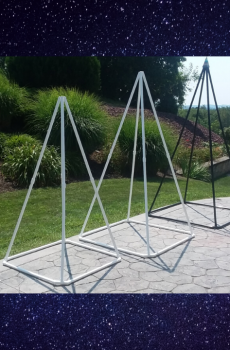 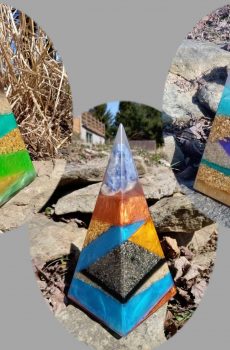 Give us a ring